The Five Stages to Pathways Success 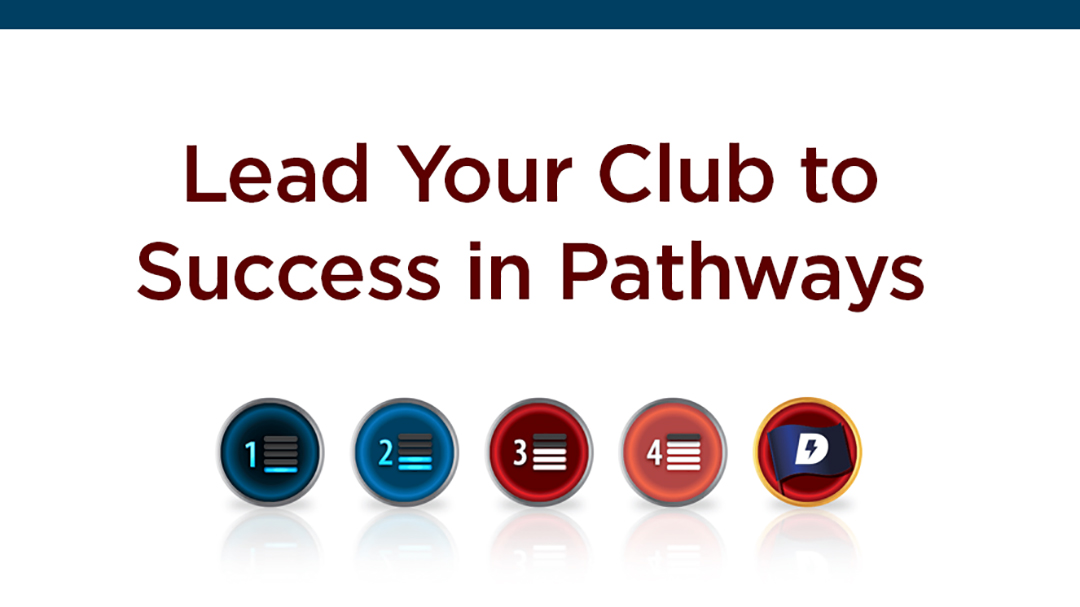 District 32 was launched into Pathways in spring of 2018, and different clubs have had varying amounts of engagement of their members with the educational program; one of our District’s clubs has a number of members, both old and new, who lept in with both feet, leading to an 80% Pathways opt-in rate! How?

Northwest Church Toastmasters, Club 916914 in Federal Way, made an intentional decision to embrace Pathways—some through gritted teeth at times, but all looking forward to where the Toastmasters journey would take them. The club proceeded through five stages of encouragement to engage and succeed in Pathways, and how they fared in their club:

Inspire by blazing a trail

The club’s success in getting on board with Pathways was an intentional effort by several members. The leadership team realized that they didn’t wish to leave new members to fend for themselves in Pathways; the club needed some experienced team members to engage with it and blaze the trail ahead to help new members succeed.

Some experienced Toastmasters abandoned the legacy program to join the Pathways program; this meant a sacrifice on their part, some more than others depending on how far they had proceeded already toward a DTM award. One was working on both at the same time, with a goal to complete the legacy DTM by June 2020, the last date to complete it.

Key to the success of the club’s Pathways venture has been talking about the decision. Each trailblazing member approached it their own way, but each let the rest of the club know what they were doing and why.

Club president during the early phases of the Pathways journey was Mark Knodel, who reached CC then chose to follow the Motivational Strategies path. About the same time as Mark began his path, so did new member Elena Padgett. To the great delight of the whole club, the two of them cajoled one another as they kept pace and both moved through their separate pathways. “Having a friendly competition with Mark motivated me,” says Elena. “As soon as I was done with one speech I immediately scheduled the next one.” She is completing the Dynamic Leadership path, and through it she has shared her experiences and thoughts on leadership styles, communication tips, and mentoring opportunities she has received from Toastmasters. She practiced using presentation software, managing a difficult audience—and even rehearsing for a job interview. Great news: she was hired!

Another club member, Carl Johnson, who had attained Distinguished Toastmaster in the old educational system, has been a Pathways Guide since January of 2017 and has been an invaluable resource for us all as we negotiated the new educational program. He has already completed two paths Presentation Mastery as well as Visionary Communication. He has aided by the fact that he’s a member of a more than one club with more opportunities to speak! He said that he was about to quit Toastmasters but the Pathways educational opportunities has give him a new excitement in being a small part of the growth and success of the many members of our club.

Sandy Allnock was one who also “gave up” the legacy program while about halfway to DTM (to the chagrin of many Toastmaster friends!). “I’ve never been in Toastmasters for the purpose of reaching alphabet-soup goals,” she says. “As a self-employed person, ACS, ALS, and DTM mean little in my work, so I felt I’d be more valuable to my club as an encourager to new members.” Jumping to the new program, she made sure she stayed “ahead” of new members as the club achieved levels together, so if there were bumps in the road, she could research answers and be prepared to assist. Just this summer, she completed the Presentation Mastery path, and is beginning on the new Engaging Humor path next!

Every club has members who aren’t ready for a change like Pathways. Ours has that, too! For some, it has been a technical problem; simply logging on and figuring out where to go. For others, paper works better for them as a learning method.

Various members have helped each other in the process of logging in and navigating through the TI website. A few tips we’ve discovered:

The club also prints out the Icebreaker speech project for new members, so they can begin on their journey right away without having to figure out how to navigate the website. The printout is given to them right away at their New Member Orientation, so they can get started! Some new members have needed the other Level 1 projects on paper, as well, and are eventually encouraged to move to the website as they start relaxing into the process of learning and giving speeches.

Another key to the club’s Pathways success has been in a practice of regularly awarding certificates for each level achieved by each club member. On the last meeting of each month, in a short but powerful ceremony, the VPE awards certificates to anyone who has achieved a Level during that month. This not only encourages those who are marking these milestones, but keeps the entire club keenly aware that members are progressing in their educational goals, and makes them want to reach their own new levels of achievement!

In addition to rewarding Pathways levels, certificates are also presented when one member awards another club member with a digital award within the Pathways program! While the awards are only visible to the sender and recipient, the sender lets the VPE know which awards they sent and to whom, so the paper certificates can be created and presented.

The club invented one other award, naming it after a dedicated former member: the Robert Hair Award. These special framed awards are presented to club members who, within a Toastmasters year, fill each meeting role at least once. It’s a coveted award, and incentivizes members to sign up for roles to complete their own service to the club!

A bonus award: the club rewards Icebreaker speeches immediately, not at the month-end meeting:

NWC club now has 23 members, 18 of whom have signed up for Pathways! Nine members have achieved at least one educational award (many have several!), two have completed at least one path. Seven are still working toward legacy awards, some at the same time as beginning their Pathways journey.

All of this also led to NWC club met EVERY goal in the DCP program – as leadership always tells us, if club members succeed, the club succeeds! Northwest Church Toastmasters Club has had no problem at all growing and keeping club members motivated in their educational goals since Pathways began; hopefully their story can inspire you to move YOUR club into great success through Pathways!