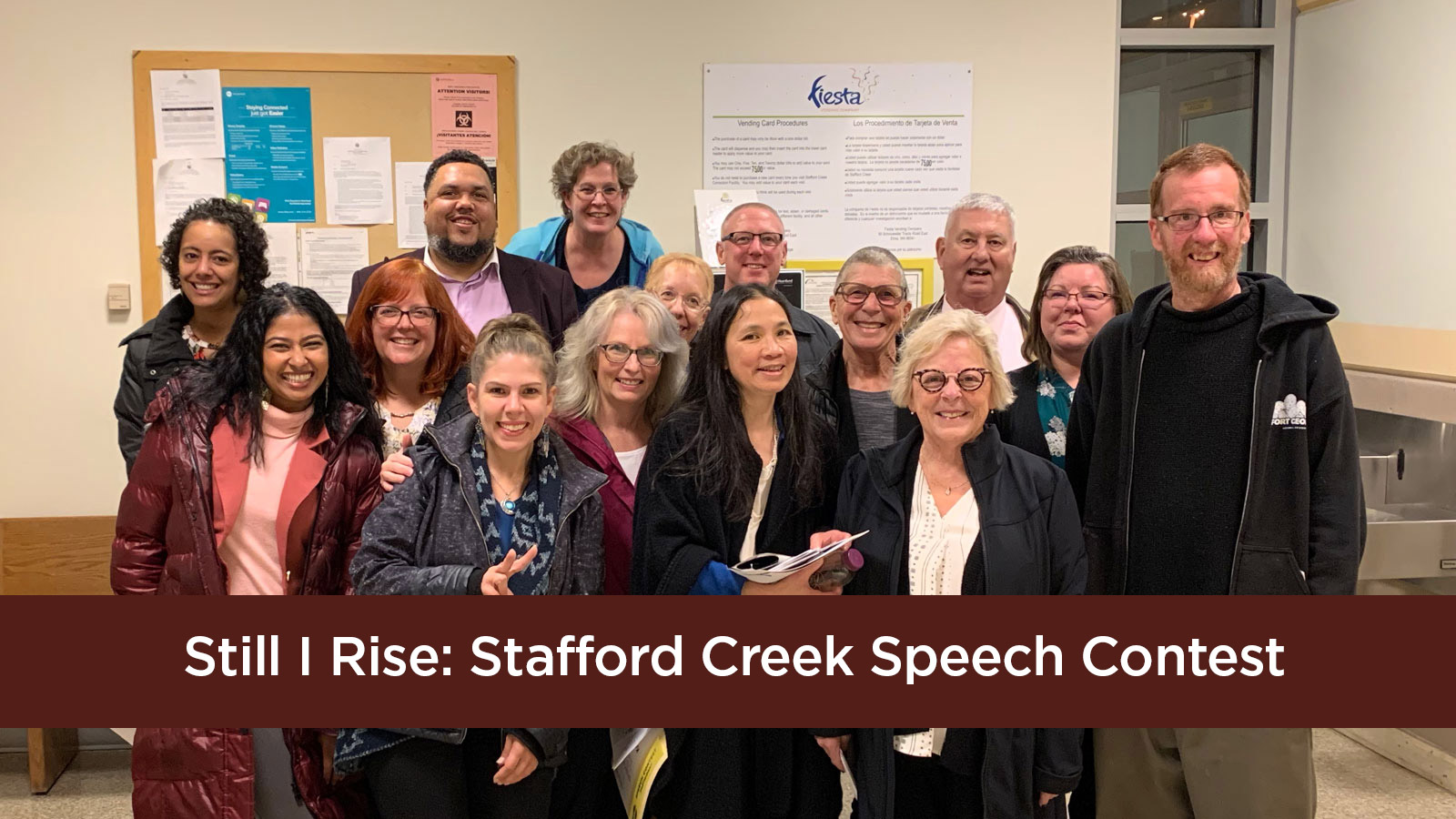 While most reading this article will never set foot behind prison walls, far too many will.  And yet a few of us will do what might seem unthinkable: voluntarily go to prison. So it was on October 16th when I joined Prison Club Sponsors Jim & Vicky Roberts and about 25 others “behind the walls” at Stafford Creek Corrections Center (SCCC) in Aberdeen, WA for a special speaking event entitled: Still I Rise – Inspirational Moments & Overcoming Adversity.  The event, a speech contest with contestants from both inside and out, was hosted by the chartered Club The 9th Wave, and supported by the Harbor Lights & the New Horizons gavel clubs, all three of which meet behind the walls at SCCC.

Weeks prior, each of the visitors were required to submit personal information in order to be cleared by prison staff to attend. On the day of the event, we gathered inside the visitor’s entrance where we placed our personal belongings (keys, wallets, phones) inside lockers and proceeded through a security process much like that common at an airport—placing our shoes and jackets on a x-ray conveyor belt, walking through a metal detector, some of us being given a gentle pat-down.  From there, we proceeded to a small waiting area until it was time for us to be escorted “behind the walls.” This is where the airport analogy comes to an end: at the approved time, the sally port door slid open, our hands were stamped, we stepped inside, and the door clanked shut behind us. Confined inside the sally port we were counted, our identities verified for a second time, and we were given instructions about how to proceed through the security fence to the visitation room inside the prison.  Once the control room radioed approval, the external sally port door slid open, we exited the building, and then we walked through the razor-wire fence to the gate just outside the visitation room. When everyone was outside and standing at the gate, the sally port door closed, the gate opened, and we were free to walk into the visitation building.

Once inside, the environment changed drastically: the room was warm and well-lit with large works of art displayed on the walls, contributions of men living at the institution. Our 25 visitors joined the 50 or so Toastmasters from “inside” in milling around and making introductions. We were immediately welcomed with friendly handshakes,  warm hellos, and words of gratitude for us making the time to attend the event. After a few minutes of greeting people, the meeting was opened by program co-chair Keayn* with special words of thanks for Jim & Vicky Roberts: “Love, Respect, Admiration, Gratitude. Without Jim & Vicky, we would have no clubs here.” The room erupted in thunderous applause and a standing ovation for the beloved club sponsors and outside organizers of the event.  What was immediately clear is just how well respected Jim & Vicky are, both from the men inside and from our visiting Toastmasters.

Up next was the Toastmaster for the evening, Garridan, who introduced Senator Claire Wilson to make a few opening remarks for this “historic, never been done before” event at Stafford Creek.  Senator Wilson shared her personal commitment to supporting incarcerated people, both inside and while reentering our communities. (As an aside, Senator Wilson remarked after the event that she would like to see Toastmaster programs inside all of our state prisons, impressed with the positivity she witnessed firsthand. I know that I am not the only Toastmaster in Washington who would like to see this vision realized!)

The contest featured eleven speakers, six from inside, five visiting from outside. We were regaled with mostly inspirational and humorous speeches. From our outside speakers, Sandy Allnock talked about “Snowboarding” her way into Toastmasters, Kyle Hall revealed how a single question changed his life, Christy Danforth talked about gaining confidence, and Robin Lee reminded us that “anything worth doing, is worth doing badly first.”  Also from the outside was Inside Out Club President Stephen Percer, a former resident at SCCC, who inspired us with his speech “Nobody’s Fool.”

As impressive as our outside speakers were, our inside speakers were well prepared and ready for their stiff outside competition.  Speaking from the heart, Brian suggested that if we FOCUS, we ALL can experience happiness and peace of mind. Isaiah, with booming voice, let us know that “life ain’t cupcakes and rainbows.”  Perhaps the best quote of the night came from our last speaker, Richard, who quipped that he was the third person of the night to quote from Webster’s Dictionary, “So he (Noah Webster) must be a pretty happy guy tonight.”

All three contest winners were from inside clubs. Coming in third place was Jason who wondered aloud: “How many people here have been called something that does not describe them?”  The rhetorical question allowed Jason to share how he has been able to overcome labels placed upon him, and how we might do the same. In second place was a moving speech by “Doc” about the strength of his mother in choosing to call him David over the objections of his abusive father who had named him Michael.

And taking first place was “SP,” who managed to both inspire and humor us with his speech entitled “Half-Time at the Rice bowl,” a parody of a football coach’s “half-time” speech.  Rather than coaching a football game, SP imagined a coach inside the prison’s day room on “store day” after the residents receive their paychecks. The coach exhorts the gentlemen to make good use of the microwave: “Your Rice Bowl is ultimately waiting out there for you. Rice Bowls are for Winners! Go! Win! Win with coveted herbs and spices!”

After the awards were given, we had a few minutes for giving our parting salutations before the prison staff ushered us outside. Walking out of the dayroom and into the darkness I was reminded how thankful I am for people like Jim & Vicky Roberts who have faithfully supported our prison clubs by attending each week. Between fences lined with razor-wire, those of us “just visiting” for the evening remarked to one another how inspired we were by the incarcerated men.  Back through the several gates, into the sally port, and into the visitor reception area, we all agreed that we would like to attend another such event soon. Leaving the prison, I was somehow filled with hope.

As I conclude, I encourage YOU to consider “going inside” prison. All of the prison clubs in Washington State are looking for volunteers and are happy to have people visit. Event co-chair Keayn was not quite right when he said that “without Jim & Vicky, we would have no clubs,” but he was very close to speaking the truth.  You see, every Toastmasters meeting inside the prison MUST be attended by at least one outside volunteer, or the meeting will be cancelled for the evening. With great sadness I report that since the night of our event, Jim & Vicky Roberts have had to step down from volunteering at Stafford Creek because of health issues. We will need several volunteers to help continue these three clubs.  If you are interested, please contact Ms. Branwyn Mansford at bemansford@doc1.wa.gov. She would love to hear from you. If you are interested in visiting one of the other prison clubs in Washington, feel free to contact me and I will connect you with the right people.

Lastly, I would like to personally thank each and every Toastmaster who has supported our prison clubs… with time, money, and well wishes.  These clubs cannot meet without your support. Let each of us add our voices to the chorus of the Stafford Creek Toastmasters:

*Last names of our “inside” members have been omitted at the request of prison staff.

A Distinguished Toastmaster, Alex Mayo first attended Toastmasters while incarcerated at Airway Heights Corrections Center near Spokane, Washington in October 2009.  He currently serves as the District 32 Webmaster and Vice President of Education for the Inside Out Toastmasters Club in Federal Way, a club specializing in supporting Toastmasters in Reentry. Alex was recently selected by JustLeadershipUSA as a Leading with Conviction 2020 cohort member, recognizing him as a leader in criminal justice reform.